So today, having unstable mood as I always do lately, I decided to visit a nature reserve at MacRitchie, with a hope that mother nature would lend me some strength. But who knows, this huge park has a lot of macaques!

If you love animals and want to take picture as close as you can, always be alert that these wild animals can always snatch your camera/phone. Don’t make any noise by clicking your tongue or make other funny noises, as they might think you were scaring them off. Don’t step on a dry leaves, as the sound would scared them as well. Be gentle when walking closer towards them. Be extra gentle and don’t make any noise when open your camera/phone. But bear in mind, ALWAYS BE ALERT!

I observed these wild creatures and learned that most of the time they will ignore you if you just walk pass through them without making too much noises and didn’t bring any food or anything that looked like food. If you walk around the park with food or colorful water bottle, just DON’T! They will try to snatch it from you. If you try to defend your food, more macaques will come. Macaques hunt in a group.

Most of the time they are afraid of human as much as human afraid of them. If you scared of them and decided to make a run from them, they will chase after you–it’s a basic instinct of a predator. If you think they are following you, don’t run. Just stop and turn around, look at their eyes. They usually just play around and don’t really trying to chase you. Always be alert of the wild animals. Animals can read human’s emotions and facial expressions.

As I walked around the park, I followed few groups of macaques. I was standing very close to these two young macaques who were trying to open a water bottle they snatched from a human kid. After the first macaque managed to open the bottle and apparently it was just water, she dropped it to the ground. I was there with them. I tried to pick the bottle slowly and hand it back to the first macaque. She took it from me, and after a while she dropped it again. The second time I picked and hand it back to the same macaques, she dropped it again. Seemed like she’s not interested in it anymore. So finally I handed it to the second macaque who were there all the time watching us, this second macaque threw the bottle to the pond. Smart guy. 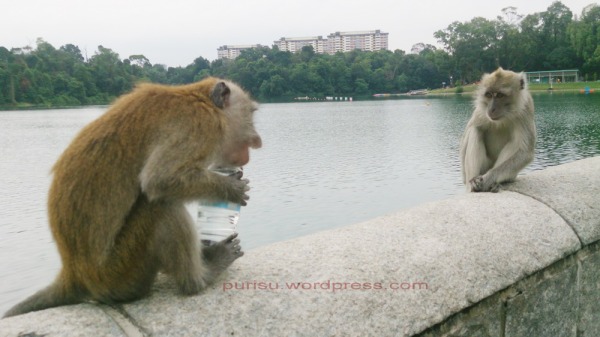 In another group of macaque, one of the young macaque who were just sitting there, finally walked slowly towards me. I was impressed how she pay interest in me, but in the same time I also be alert of what she was up to. I was watching her eyes all the time trying to read her mind, then I noticed she was eyeing my bag. I didn’t bring any food. She probably just curious what was inside my bag. With her small hands, she was trying to reach out my bag. I took one step back. I didn’t want to make sudden move nor sudden noise. She finally understood that I won’t give my bag to her. We gazed each other until she grinned at me. I grinned back to show her I wasn’t afraid of her. Grinning is a way of macaque when they are nervous or when they want to show dominant to other. 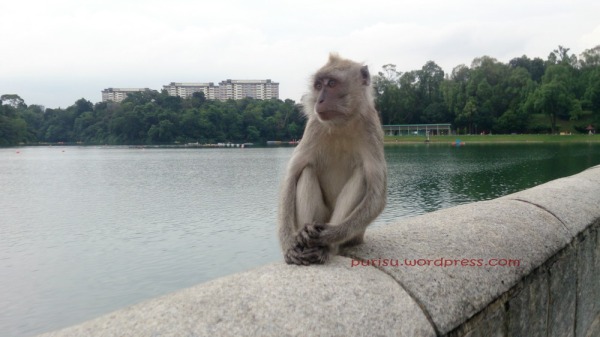 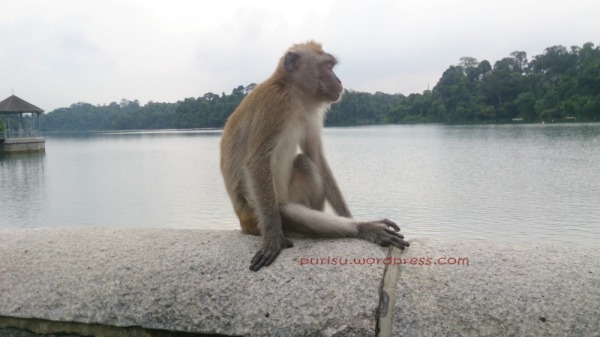 In another group of macaques, I saw they were playing around in a big group of baby macaques and few adults. Most of the time they won’t notice you as they were busy playing around with one another. I was squatting there, trying to snap some pictures with my Sony phone of these two babies who were wrestling each other. When they were seeing me about same height as their adults, these two babies approached me. They were trying to chew my shoes, my foot, and even trying to climb me. But I am not sure If I am macaque-climbable. Nope. I decided to make a move. 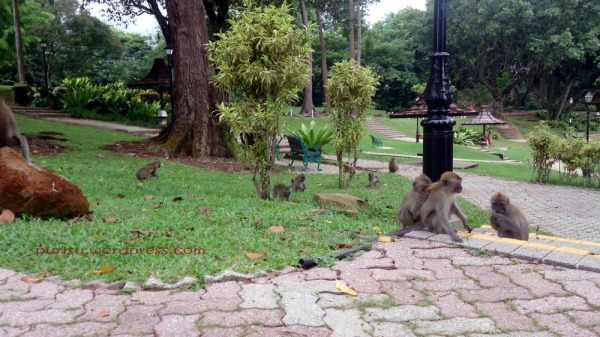 oh look! I sound like a macaque pro here! (￣ε￣＠)