Inspired by the tragic moment happened in Nagasaki 72 years ago, I dedicated this post especially for those who are affected by the Atomic Bomb.

Nagasaki was a small fishing village set in a secluded harbor, Nagasaki had little historical significance until contact with Portuguese explorers in 1543. An early visitor was Fernão Mendes Pinto, who came on a Portuguese ship which landed nearby in Tanegashima. Soon after, Portuguese ships started sailing to Japan as regular trade freighters, thus increasing the contact and trade relations between Japan and the rest of the world, then Nagasaki became a centre of Portuguese and Dutch influence in the 16th through 19th centuries.

On August 6, 1945, during World War II (1939-45), an American B-29 bomber dropped the world’s first deployed atomic bomb over the Japanese city of Hiroshima. The explosion wiped out 90 percent of the city and immediately killed 80,000 people; tens of thousands more would later die of radiation exposure. Three days later, a second B-29 dropped another A-bomb on Nagasaki, killing an estimated 75,000 people. Japan’s Emperor Hirohito announced his country’s unconditional surrender in World War II in a radio address on August 15, citing the devastating power of “a new and most cruel bomb.”

Click “Read More” below to read about some sad stories I captured during my visit at the Atomic Bomb Museum, Nagasaki.

*the wall clock froze at 11:02, exactly when the bomb exploded*

My Sister Was Trapped Under The Fallen House

“My 2 year old sister was crying hysterically, trapped under the fallen

house. The beam was so heavy. Some people tried to lift it but then went away saying, “it’s no use.”

Suddenly I saw someone running toward us. It was a woman. She was naked and her body was purple. “Mother!” Now we thought everything would be alright. Our neighbor tried to lift the beam too but it did not move at all. “It’s impossible,” he said. “There’s nothing can lift it.” He bowed deeply in apologize then went away.

The fires were approaching quickly. Mother’s face went pale. She looked down, and my sister peered up with fear-stricken eyes. Mother scanned the beam once again, then slid her shoulder under it and heaved upward with all the strength she had left in her body. The beam rose with a crack and finally my sister’s legs came free.

But then mother sank exhausted to the ground. She had been out in the field picking eggplants for our lunch when the bomb exploded. Her hair was red and frizzled. Her skin was burned and festering all over her body. Her shoulder skin ripped, right at where the beam touched it. The muscle was very clearly visible to the eye and blood was streaming out. She soon began to writhe in agony, and she died that night.” 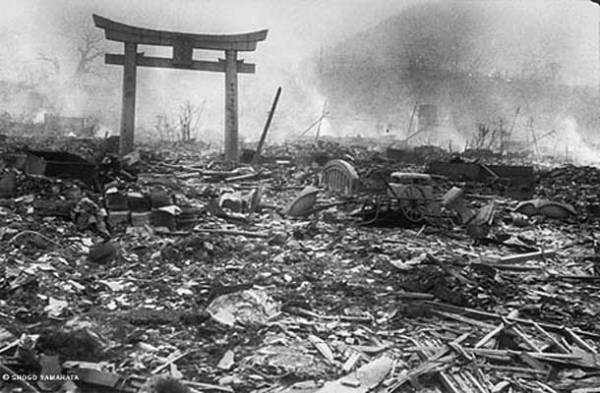 The Cries of Fellow Koreans Echo in My Heart

The Japanese were not the only people thrown into the hell of the atomic bombing. There were well more than 10,000 Koreans living in Nagasaki at that time alone. Some had been forced into military service or labor, others had come looking for a way to make a living. In addition, there were several thousands foreigners of other nationalities, including Chinese, Taiwanese, Philippines, Indonesians, and few others. They are students, residents, laborers, prisoners of war, etc. It is likely that most of these people were exposed to the atomic bombing and that several thousand perished. The circumstances of foreign people exposed to the atomic bombing remain mostly in the dark. Casualties were particularly heavy among Korean people, who were engaged in outdoor work such as the digging of shelters and the demolition of buildings for fire breaks. Many of the survivors were subjected to further hardships after the bombing, having no place to take refuge, being unable to make themselves understood and suffering discrimination and neglect.

“…There was a sudden, brilliant flash of light. I thought I was about to die. But before I had a chance to throw myself onto the tracks I lost consciousness. I did not open my eyes and sit up until my fellow Korean worker, Mr. Han, shook me and called my name…

I was carried to Isahaya Primary School That night I fell asleep in a pitch-dark classroom echoing with the groans and cries of the injured. When I woke up the following morning, I found myself embracing the man who had been lying beside me and who was now a cold corpse. After a while I crept out of the classroom to the toilet. Once out in the corridor, I heard cries in Korean coming from the neighboring classroom.

When I went into that room I found 50 or 60 of my fellow Koreans lying naked and burned like lumps of flesh and groaning in pain. Then when I shouted, “What’s the matter with all of you?” in Korean, they crawled toward me crying and begging for help. It seems that they were young men brought from Korea by force to work in Japan. They could not speak Japanese. They had been exposed to the atomic bomb explosion while engaged in construction work outside the arms factory in Ohashi. Dressed only in their underpants, they had suffered terrible burns. The more I heard from them the more a feeling of anger over the situation and affection for my countrymen welled up inside me.”

The Stillness of Death

Branch 14 of the Fukuoka Prisoner-of-war Camp was located in Saiwai-machi only 1,650 meters from the hypocenter. Dutch, Indonesians, Australian, British and other foreign prisoners were interned there and forced to work at the Mitsubishi Nagasaki Shipyard. The following is the terstimony of Dutch POW Jurgen R Onken;

“It was about noon, Aug 9. The prison of guard shouted “Jasumi!” To us prisoners, that meant 10 minutes of rest in the sunshine between the barracks… A Single airplane in the blue sky caught our attention. Then an intense light appeared stronger than the sunlight, with the fierceness of fire. A great explosion followed. And then darkness — darker than night. Breathing became difficult. The unbelievable sound of collapsing buildings and the noise of splitting beams filled the air. Then silence, the stillness of death…

We were buried alive under Nagasaki’s ruins, like a destroyed ants’ nest. The first one I found was Willy Aalders, sitting on a small wall. ‘Willy, Willy, away from here,’ I said as I touched his shoulder. ‘I cannot. Look here,” he answered and showed me his stomach. It was one big bloody wound. He covered it with both hands again, bent his head down and said nothing more. I ran for help. Somewhere else I saw his brother, our camp leader. He was motionless and pale. His head was wedged between two beams on which some wreckage was piled… Others who freed themselves were already at Willy’s side and carried him away.”

A Boy Standing at a Crematory in Nagasaki, 1945

Joe O’Donnel took photographs of Japan after the Second World War as a news photographer for the American military. Recently he spoke to a Japanese interviewer about his picture of a boy standing amid burned ruins next to a crematory. The following is a paraphrase of what he said;

“When I arrived at Nagasaki from Sasebo, I looked down at the city from the top of a low hill. I saw some men wearing a white mask. They were working near a ditch full of burning coal.

I noticed a boy about ten years old walking by. He was carrying a baby slung on his back. In those days, In Japan, it was common to see children playing in vacant lots with their little brother or sister on their backs, but this boy was clearly different. I could see that he had come to this burning ground for a serious purpose. He was barefoot. When he reached the edge of the crematory, he stopped and peered ahead with a fixed expression. The infant’s head was tipped back as if the baby were fast asleep.

The boy stood there next to the area for about ten minutes. The men in white mask walked over to him and gently began undoing the cords that were holding the baby. Then I first realized that the baby was already dead. The men held the boy by the hands and feet and place it gently on the hot coals.

The infant’s boy made a hissing sound as it was placed in the fire. Then it lit up in a brilliant flames like a deep red of the setting sun. The boy stood there erect and motionless with his innocent cheeks shining scarlet. I noticed that the lips of the boy were also streaked with red as he watched the flames. He was biting his lower lip so hard that it shone with blood. The flames burned low like the sun going down, and the boy turned around and walked silently away from the burning pit.”

The decision to use the second bomb was made on August 7, 1945 on Guam. Its use was calculated to indicate that the United States had an endless supply of the new weapon for use against Japan and that the United States would continue to drop atomic bombs on Japan until the country surrendered unconditionally. The city of Nagasaki, however, was not the primary target for the second atomic bomb. Instead, officials had selected the city of Kokura, where Japan had one of its largest munitions plants.

“Fat Man” was the codename for the atomic bomb that was detonated over the Japanese city of Nagasaki by the United States on 9 August 1945.

The B-29 “Bockscar”, piloted Major Charles Sweeney, was assigned to deliver the Fat Man to the city of Kokura on the morning of August 9, 1945. Accompanying Sweeney on the mission were copilots Charles Donald Albury and Fred J. Olivi, weaponeer Frederick Ashworth, and bombadier Kermit Beahan. At 3:49am, “Bockscar” and five other B-29s departed the island of Tinian and headed towards Kokura. When the plane arrived over the city nearly seven hours later, thick clouds and drifting smoke from fires started by a major firebombing raid on nearby Yawata the previous day covered most of the area over Kokura, obscuring the aiming point.

Running low on fuel, the crew aboard Bockscar decided to head for the secondary target, Nagasaki. When the B-29 arrived over the city twenty minutes later, the downtown area was also covered by dense clouds. Frederick Ashworth, the plane’s weaponeer proposed bombing Nagasaki using radar. At that moment, a small opening in the clouds at the end of the three-minute bomb run permitted bombardier Kermit Beahan to identify target features.

At 10:58 AM local time, Bockscar visually dropped Fat Man. It exploded 43 seconds later with a blast yield equivalent to 21 kilotons of TNT at an altitude of 1,650 feet, about 1.5 miles northwest of the intended aiming point.

The failure to drop Fat Man at the precise bomb aim point caused the atomic blast to be confined to the Urakami Valley. As a consequence, a major portion of the city was protected from the explosion. The Fat Man was dropped over the city’s industrial valley midway between the Mitsubishi Steel and Arms Works in the south and the Mitsubishi-Urakami Ordnance Works in the north. The resulting explosion had a blast yield equivalent to 21 kilotons of TNT, roughly the same as the Trinity blast. Nearly half of the city was completely destroyed. (taken from an online source — red)

*the ruins of Urakami Cathedral* 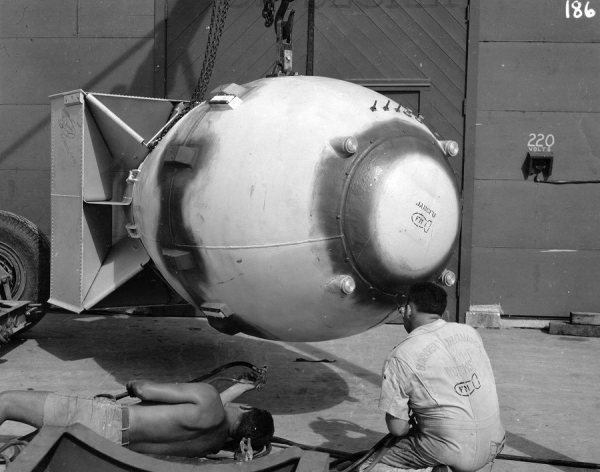