Today we have been warned to have even more tiring day compare to previous day. We travelled from Lhasa to Shigatse (a.k.a. Rigaze). (っ˘ω˘ς )

Shigatse, officially known as Xigazê (Chinese: 日喀则; pinyin: Rìkāzé Nepali: सिगात्से), is a prefecture-level city of the Tibet Autonomous Region of China, with an area of 182,000 km2 (70,271 sq mi). It also means ‘the fertile land’. It sits in the plain at the confluence of the Yarlong Tsangpo and Nyangchu Rivers, where Tibet’s most fertile land is to be found. Shigatse is of great importance for its location in this area. It is 300 kilometers (about 186 miles) away from the world’s highest peak Mt. Everest, 150 kilometers (about 93 miles) away from the Sakya Monastery and also on the only path to Tibet’s holy lakes. Thus it is quite an important base for people heading for those places. [source: wikipedia]

The city has a history going back more than 600 years and it is this ancient holy city that is the traditional seat of the Panchen Lama, one of the spiritual leaders in Tibet. The city is also the cultural, economic and political center of Tibet. It is located within the historical Tsang province of Tibet.

Along the way from Lhasa to Shigatse was a beautiful journey we enjoyed from our bus, and we stopped by at Yamdrok Lake, Kharola Glacier and Palcho Monastery. ヽ(*・ω・)ﾉ 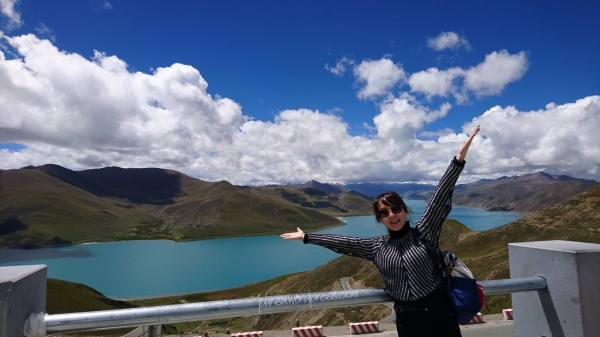 Yamdrok Lake (also known as Yamdrok Yumtso or Yamzho Yumco; Tibetan: ཡར་འབྲོག་གཡུ་མཚོ་, Wylie: yar-‘drog. G’yu-mtsho, ZYPY: Yamzhog Yumco; Chinese: 羊卓雍錯; pinyin: Yángzhuō Yōngcuò) is a freshwater lake in Tibet, it is one of the three largest sacred lakes in Tibet. The lake is surrounded by many snow-capped mountains and is fed by numerous small streams. The lake has an outlet stream at its far western end and means turquoise in English due to its color. [source: wikipedia]

The lake is 130 km long from east to west and 70 km broad from north to south. The lake bank is 250 km long and its surface is 638 square km. Standing at an elevation of 4,441 meters above sea level, the lake’s average depth is 20 to 40 meters, with the deepest point at 60 meters. Is is the largest inland lake on the northern range of the Himalayas. Supplied with melted ice, the lake has a low level of salinity. In the Tibetan language, “Yamdroktso” is an ancient name meaning “upper pasture”, comparing the lake water to jadeite.

A little bit further from the touristic area, our bus alighted us to a smaller area where no tourits spotted, but only locals offered their giant Tibetan Mastiffs to take pictures with us. It cost 10RMB to take pictures with these drooling puppies. Further down the sloping ground, there were few Yaks waiting for us. It also cost us 10RMB to ride the Yak on the spot. I paid 20RMB to make the lazy cow went down a little bit to the lake, just nice as my shoes were not getting wet. <(￣︶￣)> 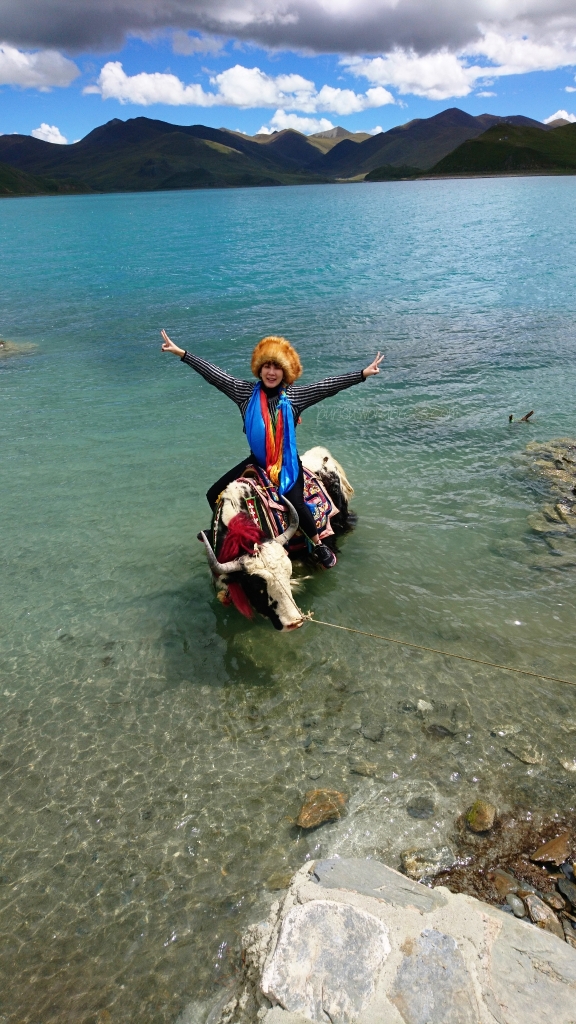 The Tibetan Mastiff is a large Tibetan dog breed (Canis lupus familiaris). Originating with the nomadic cultures of Tibet, China, India, Mongolia and Nepal, it is used by local tribes of Tibetans to protect sheep from wolves, leopards, bears, large mustelids, and tigers. [source: wikipedia]

The Tibetan Mastiff, or Do-Khyi, is a large working dog from the Himalayas. Tracing the breed’s history back to antiquity, it acted as the guardian and companion of the Tibetan villagers and nomads, as well as being the traditional guardian of the Tibetan monasteries. Some accounts by travelers to the region, dating as far back as the late 1200s, describe a large dog that may have been a representative of one of the landraces used to establish the Tibetan Mastiff as a standardized breed. Heights 61-71 cm, and weight 64-78 kg. Price in locals is 10,000RMB.

Yak, (Bos grunniens), long-haired, short-legged oxlike mammal that was probably domesticated in Tibet but has been introduced wherever there are people at elevations of 4,000–6,000 metres (14,000–20,000 feet), mainly in China but also in Central Asia, Mongolia, and Nepal. In China, where they are known as “hairy cattle,” yaks are heavily fringed with long black hair over a shorter blackish or brown undercoat that can keep them warm to –40 °C (−40 °F).

Wild yak adults stand about 1.6 to 2.2 m tall at the shoulder and weigh 305–1,000 kg. The head and body length is 2.5 to 3.3 m, not counting the tail of 60 to 100 cm. The females are about one-third the weight and are about 30% smaller in their linear dimensions when compared to bull wild yaks. Domesticated yaks are somewhat smaller. Colour in domesticated yaks is more variable, and white splotches are common. Their horns are 80 cm (30 inches) long in the males, 50 cm in females. Price in locals is 15,000RMB.

Satisfied with my two buckit lists being checked and done, we all hopped back to our bus and continue our journey to see the glacier. ╰(*´︶`*)╯ 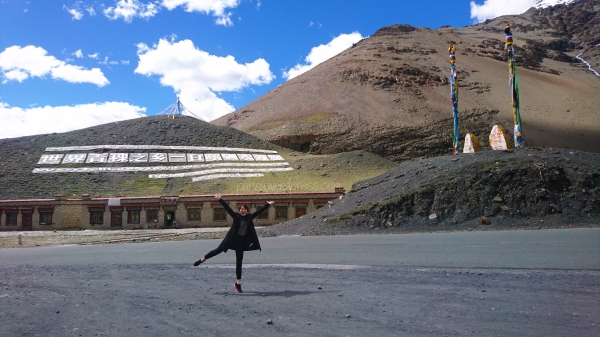 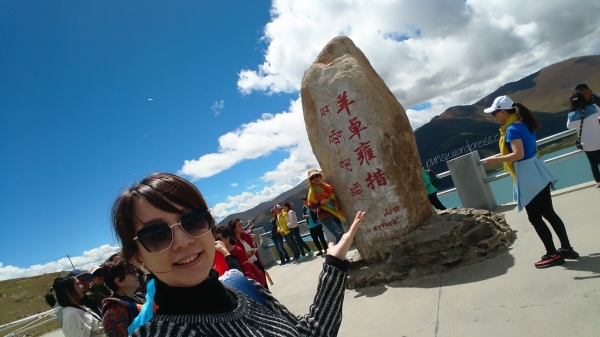 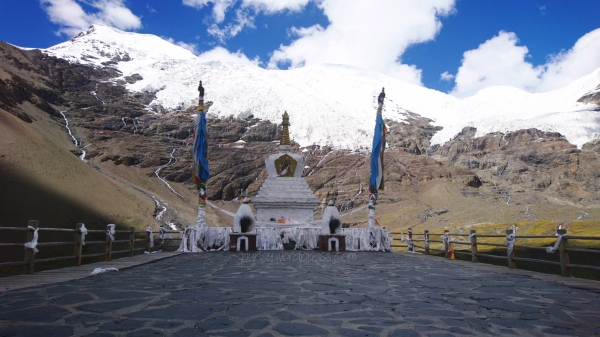 About two hours away from Yamdrok Lake is Kharola Glacier (Kharola, chángruòlābīngchuán卡若拉冰川 in Chinese). It isn’t a big glacier, but the white glacier is spectacular from the highway, and it is close enough (about 300 yards) to walk to from the highway. It was 5560 m above sea level.

About 5,600 meters north of the main peak of Karuola Mountain which is 71 kilometers away from Gyangtse country, Shigatse of southwest of Tibet Autonomous Region.

Hopped down from the bus, now it’s time to visit Palcho Monastery. 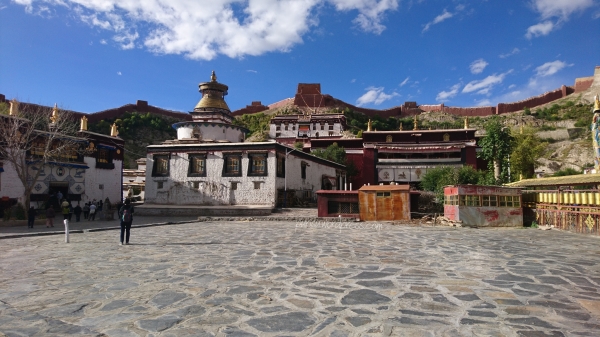 A Kumbum (Wylie: sku ‘bum “one hundred thousand holy images”) is a multi-storied aggregate of Buddhist chapels in Tibetan Buddhism. The most famous Kumbum forms part of Palcho Monastery. The first Kumbum was founded in the fire sheep year 1427 by a Gyantse prince. It has nine lhakangs or levels, is 35 metres (115 ft) high surmounted by a golden dome, and contains 77 chapels which line its walls. [source: wikipedia]

Palcho Monastery is a typical Tibetan Buddhism temple architecture with temples in the stupa, stupa in the temple. These well preserved stupas and temples stay harmoniously and bring out the best in each other. Its architecture fully represents a typical style of temples from thirteenth century to fifteenth century in Later Tibetan area, so it is reputed as a monument of architecture period. Among those temples and stupas, the Myriad Buddha Stupa, with different chapels overlapped inside, is the best known architecture in Palcho Monastery. And the different Zhacangs, subject to different sects or shared together are great places to find the local monks life and experience the Buddhism.

And that was the three stops we went for today. Now I will post some of the scenery I saw along the way to Shigatse. Enjoy!! ☆ ～(‘▽^人) 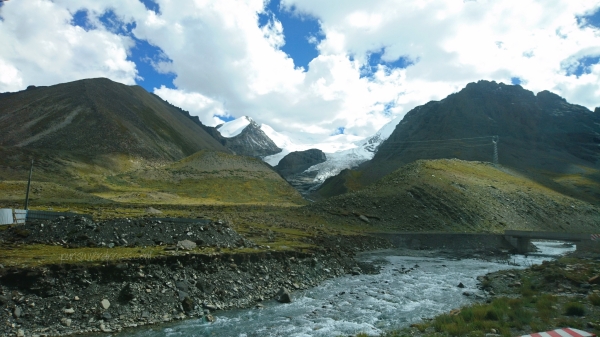 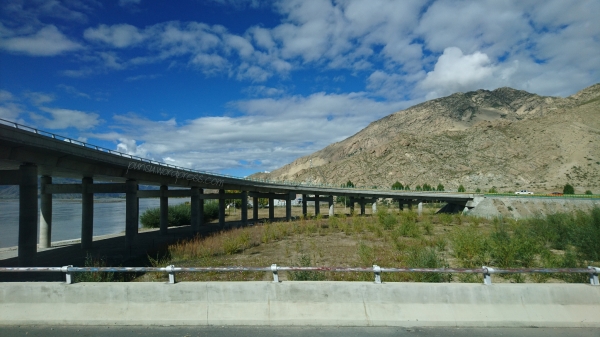 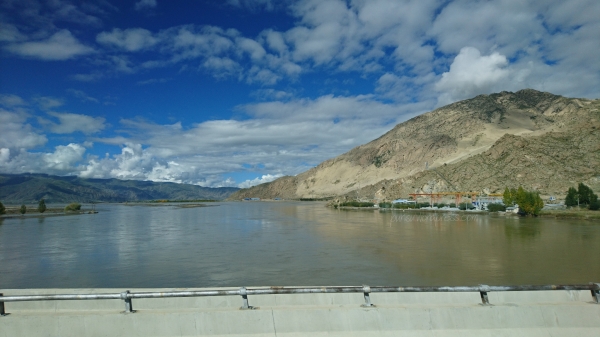 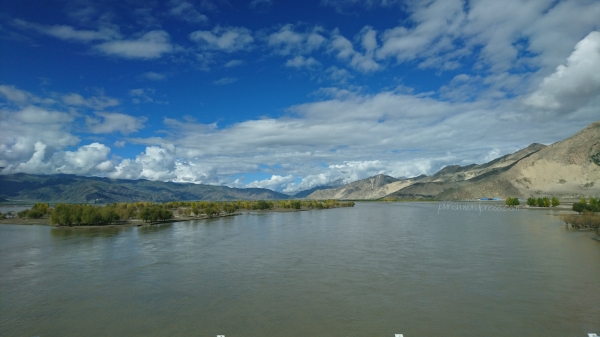 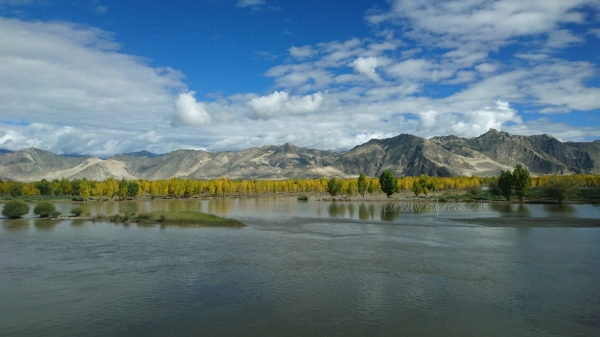 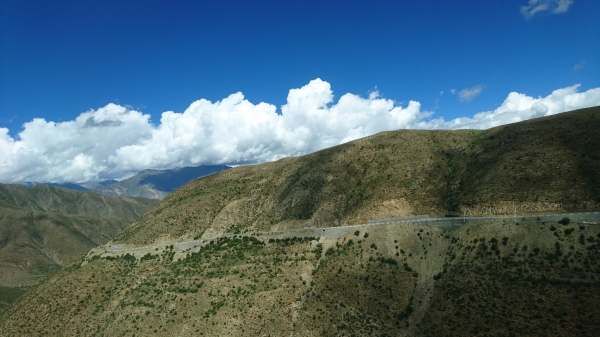 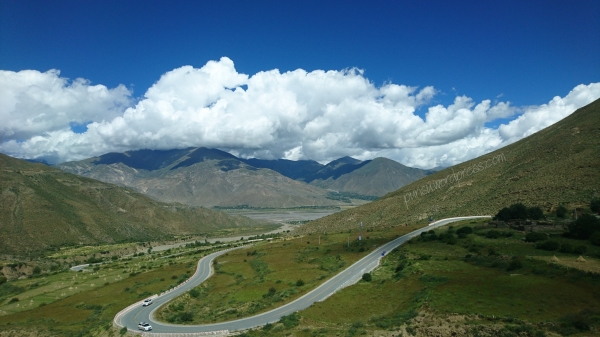 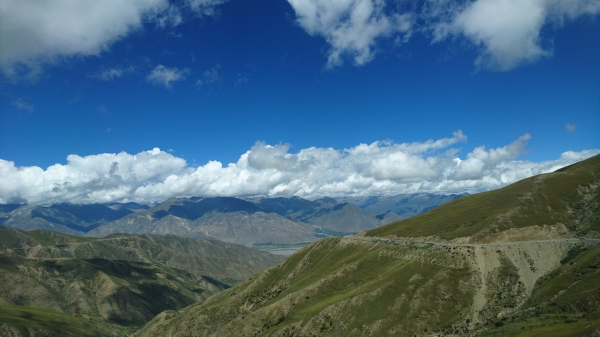 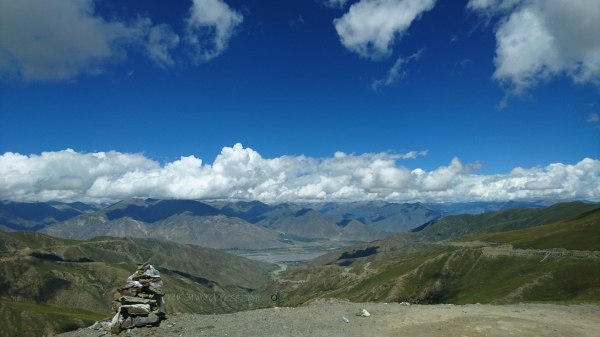