Thankfully the rain subsided just after we had our lunch! ♡＼(￣▽￣)／♡

We were not planning to stay late today, because we had so many walks and we had to catch a train back to our hometown tomorrow at 7AM. So we did the afternoon Wednesday in slower pace.

But before that, here’s a picture of me enjoying my chewy-vanilla toast I loved it SO much! I had the same toast for 2 nights in a row!! (/▽＼*)｡o○♡ 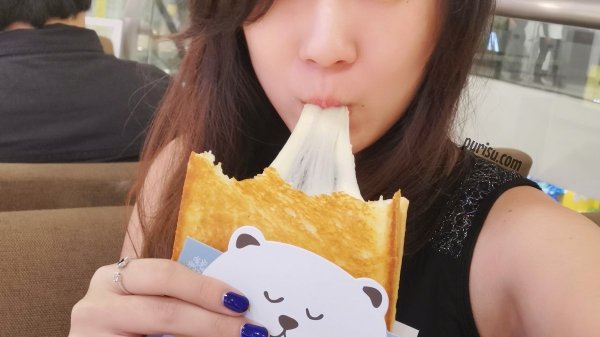 Our first stop after lunch at Raminten was to stopped by at Saint Fransicus Xaverius Church and had our water topped up there. We took taxi from Raminten to the church, then we walked to Post office nearby. I admire colonial buildings with high ceiling and thick walls. Kantor Pos Besar Yogyakarta is the biggest and main post office in Yogyakarta, it opens 24 hours on weekdays. And if you have read my other blogs you should’ve knows that I always stop by at a post office during my holiday to post a card for my dad – as a souvenir. <(￣︶￣)>

Built in 1912 by a group of engineers from Burgerlijke Openbare Werken (BOW) during Dutch colonalism in Indonesia. With the building area of 1.121,45 m², this building stands in a corner of Jalan Panembahan Senopati (previously was Kampementstraat) and Jalan Trikora (previously was Kadasterstraat) and looked like a horseshoe on the plan drawing.

And while we were here, that also means we already at Titik Nol Kilometer Yogyakarta!

This spot defines the zero km point of the city and the location is exactly in the Margo Mulyo Crossroad in Gondomanan Sub-District. Tourists only need to reach Ngupasan Village to find it. That area also features several famous landmarks like Serangan Umum Satu Maret Monument (March 1st General Offensive Monument), Kantor Post Besar Yogyakarta, BNI Yogyakarta and Monumen Batik Yogyakarta. At night this place is usually crowded with locals hanging out with friends or enjoying their late night snacks with some local delicacies. o(≧▽≦)o 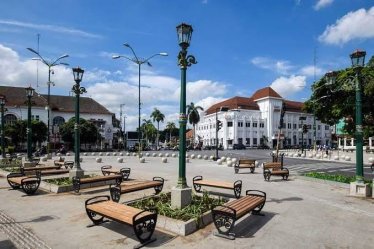 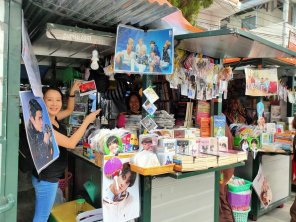 Our next stop was Fort Vredeburg Museum, which was a former colonial fortress located in Yogyakarta during Dutch colonialism. The military complex has been converted into an Independence Struggle Museum which was opened in 1992, located in front of Gedung Agung and Kraton Yogyakarta (Sultan’s Palace). We spent about an hour at this museum, before the rain started to pouring harder. (￣▽￣)

A little bit from wikipedia; In 1760, after the foundation of the new Kraton Ngayogyakarta Hadiningrat, the Dutch governor of North Java coast Nicolaas Harting requested a fort to be built in Yogyakarta. On 1867 the old fort was destroyed by an earthquake, then was rebuilt and renamed Fort Vredeburg, which in Dutch language means “Peace fort” due to peaceful co-existence of the fort and the Kraton of the Sultan. Later in 1942, during the Japanese occupation of Indonesia, The fortress was taken over by the Japanese army and made into the army’s headquarters and war prison. After the Japanese left in 1945, Fort Vredeburg served the Indonesian Army as military command post, barracks and prison for suspected members of the communist party. 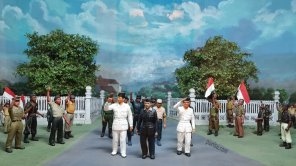 It was 15 minutes to 5PM, the rain was pouring harder and harder and we needed to rush to the market nearby before it closed! Pasar Beringharjo was only 5 minutes walk from Vredeburg Museum, but with this rain and Malioboro street was getting busier, we had to be extra careful and hoped we still had ample of time to do some shopping!

Beringharjo market becomes part of Malioboro that is worth visiting. This market has been center of economy activity since years ago and its existence has philosophical meaning. The front part and the western part of the market are the right places to find delicious traditional snacks. At the north side of the front part, you will find round brem (a kind of snack made from the extract of fermented tubers) and krasikan (sweet cake made from glutinous rice and palm sugar). In the south part, you will find bakpia cake filled with mung bean that is sold warm and wet snacks such as hung kwe and nagasari. Meanwhile, at the back part, usually they sell durable snacks such as ting-ting made of caramel mixed with peanut. ☆ ～(‘▽^人)

If you want to buy batik, Beringharjo is the best place because of its complete collections; ranging from batik cloth to batik clothes made of both cotton and silk materials, with the prices ranging from tens thousands to a million. This place is also the right market to hunt antiques… But you need to know how to haggle right! Even though the market is closed at 5PM but the dynamics of the merchants does not stop by that time. In front of the closed market, there are still many local food sellers offering many kinds of special delicacies. (b ᵔ▽ᵔ)b

We ended up didn’t buy anything from the market due to the price was skyrocketed like crazy! And I guess we were both too tired to haggle around for something that we could buy in 1/4 of their price. So yes, unless you have the energy and high motivation to haggle, this market was no fun. We crossed the street instead to check out Hamzah Batik (previously known as Mirota Batik), another famous place to buy some batik since Cyn was still looking for one. (っ˘ω˘ς )

Turned out this place was not only selling batik clothes, but they do sell a lot of souvenirs, hand-made wooden toys, accessories, home goods (that’s including beautiful paintings too!), local delicacies, and many others. And if you’re lucky enough, you could hear some locals playing traditional instruments called Gamelan.

I personally would choose this Batik store over the market across the street. Even though it was quite pricey but the quality of batik and other things at this store was not bad, and I don’t need to haggle. While Cyn was busy looking for her things, I checked out their third store to have my late tea break. (*˘︶˘*).｡.:*♡ 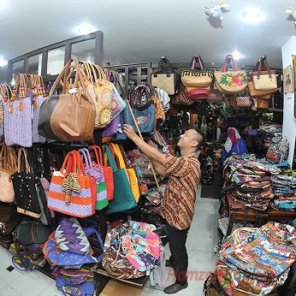 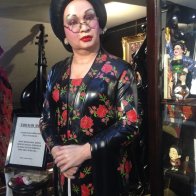 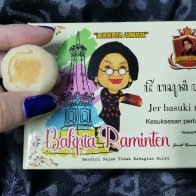 I had fun shopping many local delicacies at the batik store. But Cyn hasn’t found her batik yet! It was only 6 PM, both were hungry, ran out of $$$, super tired, my hair was super smelly and Cyn was still has an appointment with her cousin. We slowly walked Malioboro street towards our hotel. There were many sellers on the pedestrian along Malioboro street. Cyn finally found the batik she was looking for and bought it. ٩(｡•́‿•̀｡)۶

Even though it felt like our knees wanted to give up, but we managed to drag ourselves all the way from the southern part of Malioboro to shopping mall at the northern part. We departed at the mall; Cyn continued to walk to our hotel and get herself ready for her appointment, while me decided to spend few more hours at the shopping mall; had my chewy toast and went to the hair salon to get it fixed. The mall opens everyday from 10AM to 9:30PM.

We met back at the hotel after 9PM, and just hit the bed immediately.

And that’s it for my Yogyakarta holiday! I hope I did enough information for those first-timer looking for an adventure in Yogyakarta. Send me PM if you need to rent a personal driver to drive you around like I did in my day-2! (っ˘ω˘ς )

The next time I go to YGY I have to make sure to visit Goa Jomblang, Kalibiru and Lereng Merapi!!

Well I’m not so sure when my next holiday will be with this current pandemic, but SEE YA ON MY NEXT HOLIDAY!! ( ´ ∀ `)ノ～ ♡

PS: Bonus a picture of local ceiling architecture I took somewhere in my day-2.