Let’s just talk for few more paragraphs here and make it short. About the 6th day in Bangkok, the day my flight back to SG. I went to MBK in the morning and was lured by this “free thai ice tea for foreigners, just show us your passport”. So I dragged my bag to the 5th floor to get this free drink. Surprisingly, the place was in the middle of food court, and it was an exclusive area where you can only get inside if you’re a foreigner. Inside this exclusive area there were a lot of international food stalls you can name it; all over europe and asia. The food was expensive and not-so delicious, but I got the free thai ice tea I was aimed at. And it wasn’t superb either. Please note, foreigner, all those free stuffs will not always lead you to a cheap and smart decision. You can always try other local food outside instead of this exclusive area. (!҂ `з´ )

I only got 1 hour at this shopping mall, which was another thing I regret. This was a huge shopping mall with reasonable price for nice clothes and bargain. Too bad I didn’t have much time as I must rush back to airport. (ノ_<。)

Here are some randoms pictures I have left on my phone…

END_OF_DOCUMENT_TOKEN_TO_BE_REPLACED

I woke up too early this Monday morning.
It was drizzling, I walked slowly to Chong-Nonsi BTS Station, took train to Stadium Station. Once I’ve arrived at the station, all the shopping malls were not open yet. I spent my 30 minutes at the Art Café sipped my morning tea and waited patiently until the shopping malls open. <(￣ ﹌ ￣)>

END_OF_DOCUMENT_TOKEN_TO_BE_REPLACED

Today was Sunday… And you know what that means!
Me going to attend Sunday Mass!!! ♡＼(￣▽￣)／♡

It was drizzling when I opened my eyes this morning. I rushed to nearby 7/11 which was about 100m from the hotel, bought some bread and milk for breakfast, then hailed a taxi to the Cathedral. It was a short trip from my hotel and only cost me no more than 40B.

END_OF_DOCUMENT_TOKEN_TO_BE_REPLACED

From the same Asia-Discovery website this time I booked another half-day tour around the city for 980B. This time they brought me to the Grand Palace and Emerald Buddha Temple just next to the Palace. I was having my breakfast at the lobby hotel when they finally picked me up 1 hour later than what stated on the voucher I printed out. And once again, I was the last one to be picked up from my hotel. (￣ω￣) 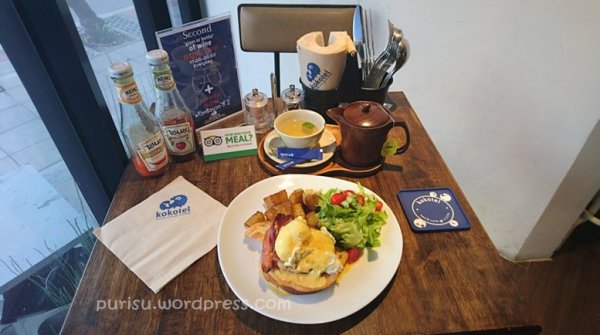 END_OF_DOCUMENT_TOKEN_TO_BE_REPLACED

The main reason I finally didn’t cancel my Thai trip was to enjoy elephant riding. So I needed help from someone local to take me there, since those elephant farm were all located outside Bangkok and it won’t be easy to reach there by myself. I’ve been looked some local tour guides around Bangkok who offer a day trip to enjoy elephant riding, and finally I chose one local tour, despites knowing any reputation of this tour agency. This is their web; it looks confincing enough for me, so I immediately paid online, printed out all the required voucher and all settled two days before my holiday started. <(￣︶￣)>

I was ready and waiting at the lobby before 6:30 AM, since they said they will pick me up at 6:30 in the morning. I already had my melon cake I bough yesterday from Neil’s Tavern, and patiently waiting. On the voucher I already printed out, they said I can give them a call if they late for more than 15 minutes. So after 30 minutes no news from the tour guide, I did call them with a help from the hotel staff. The tour guide finally picked me up at 7:30 AM. I must note that the traffic jam in Bangkok is quite horrible same as Jakarta, so one hour late consider fine. (￣▽￣*)ゞ

I was the last person they picked up from hotel. The rest of the group was 5 Japanese girls and 1 Dutch men who married with one of the Japanese girls. So please note, being late for 1 hour is consider ‘normal’ in Bangkok, considering their horrible traffic jam. Be patient with that. ┐(︶▽︶)┌

END_OF_DOCUMENT_TOKEN_TO_BE_REPLACED

I arrived in Bangkok before 11am. Followed the way to airport exit, I found this limousine stall that offered me a ride to my hotel for 1200B. I was in shocked because from the info I got, it said the price from airport to hotel was only 300B to 400B depends on the traffic jam! I supposed this was my very first Bangkok-scam, so I showed them my map with the information I got. And apparently they said it was because they are limousine so they offer higher price. Well, I wonder how many person travel with limousine in Bangkok when taxi is 3 or 4 times cheaper. (；⌣̀_⌣́)

Anyhow, from the limousine stand, I went downstair to the basement and finally found the taxi queue with the help from 3 hunky men. Apparently there was a taxi queueing machine that we should get before a taxi will stop for you. Raising your hand and ask a taxi to stop for you is not working in this airport. So might as well just join the queue to get the taxi number. Lucky for me, the line was empty and there was no queue that time.

The journey from the airport to my hotel which located in Surawong road, was about 50 minutes – it was Thursday mid-day, no traffic jam. And remember when you get into a taxi in Bangkok, always asked them to turn on the ‘meter’. Even there was a ‘meter’ sign on top of the car, but it doesn’t always mean the driver will turn on the meter for you, except you asked for it. The funny thing about this taxi driver who took me from airport to hotel, the meter said I must pay 230B, but he doesn’t have small changes! I gave him 1000B, he said he doesn’t have change. Then I gave him 500B, still no change. I gave him 300B. still no change! This can’t be serious! How can a taxi driver doesn’t have small money at all! Is this my second scam??! Lucky there was another passanger waiting for a taxi outside the hotel, and she gave small changes for me. ＼(￣▽￣)／

END_OF_DOCUMENT_TOKEN_TO_BE_REPLACED

so i had this plan to travel together to Thailand with a friend since last year, but due to some reasons, she canceled it just a day after i booked my flight and hotel. i asked around my friends and everyone already got their own plans for their long weekend. because i didn’t have anyone who wants to travel with me, i didn’t have a boyfriend and i didn’t have plan-b, mom thought i should stay at home, wallow in my room and swipe on tinder. well not literally, but she thinks a girl should not travel alone. period. (｀ー´)

i’m an obidient girl. i listen to mom even though we live 1000 miles apart. well at least for about one month. ╮(︶︿︶)╭

it was on monday morning, just three days before the day i supposed to go with my friend, my rebellious side kicked in. all my gut was telling me to go anyway. and so it was decided. i spent whole monday in the office to recheck my itinerary. i rebooked the same hotel on monday night. then on tuesday i finished up my final itinerary then booked local tours so i can enjoy the elephant riding. on wednesday i met my new boss who apparently has been stayed in bangkok for nine years. he told me about where should i go and where i should not go. some very important tips for a solo traveller like me, which I will tell you on my stories later. then on wednesday night i bought some necessary stuffs that i’ll bring along with me, packed my stuffs and ready to go. <(￣︶￣)>

i didn’t tell my mom–obviously. but based on “i shouldn’t be alive” tv series i watched, i know i have to tell at least someone or two to let me know where i’m going, with whom i go, and when i supposed to return. so i informed all my colleagues about my solo travel.