As expected it was raining on the last day! Our funny hotel does not have breakfast area, we had to walk about 25 meters to the other hotel behind it under the rain. <(￣ ﹌ ￣)>

But before that, me and Ann both had a very bad stomach upset! We suspect it was from the egg coffee and egg cocoa we had yesterday. Remember I said it tasted as my mum’s batter? The raw eggs inside our coffee and cocoa had definitely cause problem to us. Eating raw and undercooked eggs may contain Salmonella, a type of harmful bacteria. Symptoms include stomach cramps, diarrhea, nausea, fever and headache. These symptoms usually appear 6 to 48 hours after eating and may last 3 to 7 days. (ಥ﹏ಥ)

END_OF_DOCUMENT_TOKEN_TO_BE_REPLACED

We woke up quite early this morning because we had to arrived at the southern-east part of the Cát Bà island to enjoy biking before the crowds came. We had our quick breakkie while the cruise speeding to Lan Hạ bay area. (´｡• ᵕ •｡`) ♡

I had bread with a tasty passion fruit juice, sat myself on the decking area outdoor while admiring the morning beauty of limestone mountains around me. Ann prefer to stay indoor with the aircon.

END_OF_DOCUMENT_TOKEN_TO_BE_REPLACED

And finally, today was the long-awaited day! We’re going for a cruiiiiise!!! 🛳

This was actually our main goal for this holiday. It took us quite long time to search and finally I found this UniCharm Cruise from the internet just few days before our flight to Hà Nội. And apparently this was the cruise recommended by Ann’s friend too! What a coincidence! I found their website and chat to their staff. And because we were recommended by Ann’s friend we got 20% discount. Because I chatted to the staff we got additional 10% discount. In total we paid USD310 for two, for an unforgettable 2D1N cruise day. ٩(｡•́‿•̀｡)۶

I could say this was the best cruise in Hạ Long Bay! According to them, Unicharm Cruise somehow has its own special route where there were no other cruise knows, not over-crowded by tourist, passed by gorgeous limestone mountains, interesting activities, 4-stars-hotel class, super clean and superb food – you definitely want to try their fresh prawns!! (っ˘ω˘ς )

END_OF_DOCUMENT_TOKEN_TO_BE_REPLACED

After we applied SPF50 uv lotion and uv spray, off we ordered a grab to the Hồ Chí Minh Mausoleum in Ba Dinh Square. The taxi dropped us at the east side of the square at Độc Lập street, near the government office. It was a super green square, but all was closed we couldn’t enter from there and we had to make a long way u-turn. (」＞＜)」

Everywhere was closed and even with tall-ugly-green wall where we couldn’t even peek what’s inside. We couldn’t see One Pillar Pagoda! But after walked about 1km made our u-turn we finally could see the way in to the Mausoleum where tourists were gathered and queuing to get in. We were told the queue was start even before 9AM. And since we both didn’t like queuing to get ourselves roasted in the sun, we gave it a pass and we countinued make our ways to the West Lake.

END_OF_DOCUMENT_TOKEN_TO_BE_REPLACED

Landed in Nội Bài International Airport, my buddy trip, Ann, exchanged her money. I remember it was USD 1 = VND 23,300. From there she got enough money and we booked Grab to our hotel in Old Quarter Hà Nội for VND 254k, about 40 minutes.

Our itinerary for today was not too many for today – as it was almost sunset when we finally arrived in our hotel. Our official first stop was the famous Hoàn Kiếm Lake. But on our way to the lake we had our early dinner at the Highway4 Restaurant. The fine restaurant was located around the Old Quarter as well. We went up to the second floor and sat at the lower table – just like the locals do. <(￣︶￣)>

This restaurant was famous for their Nem Ca Xa Lo4 (Catfish Spring Rolls) so that was the first thing we ordered. As much as I wanted to try their Sun-dried Venison with Salt & Ant Dip, but I finally decided to order something else; Bu Niong La Chuoi (Strips of Beef grilled in Banana Leaves).

END_OF_DOCUMENT_TOKEN_TO_BE_REPLACED

I did some projects follow up to some clients on the previous Thursday and Friday, but I did not expect their rush in expecting us to get to HCMC that fast! So when the clients finally replied my emails on Saturday which I did not go to work and never noticed their emails, only in Monday morning my boss told me that I might need to go to HCMC with him on that night – on the same day.

So off we went that Monday and took the night flight. By the time we arrived in HCMC it was already almost 10PM. I could see our taxi passed by a super tall and colorful building called Landmark 81. But before talking about that charming tall guy, here’s my best shot I took during my short business trip, Bitexco Financial Tower.

END_OF_DOCUMENT_TOKEN_TO_BE_REPLACED

tuesday, 11 Aug, today was my aunt’s birthday! and my flight back to Xin Jia Po (新加坡) evening time. but before that, i still have some spare time to find my dad a gem stone.

after the driver dropped me and my friend at Bến Thành Market, we had our breakfast at one of the local restaurant called Quán Nam Giao. my friend ordered a soupy rice and i ordered a baby clam porridge. the porridge tastes so strong! i’ve never had any porridge with such strong taste before. so i had to put extra soy sauce to blend the taste. but still–i think the street food chicken porridge from my home country still the best. (*¯︶¯*) 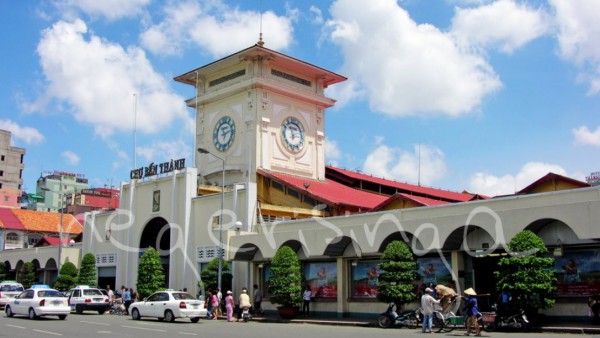 END_OF_DOCUMENT_TOKEN_TO_BE_REPLACED

it was monday, 10 Aug, and the street of Hồ Chí Minh back to busy mode as usual.

we supposed to leave the apartment at 9AM and go straight to Củ Chi Tunnels, but instead, we were late for 1 hour. i made excuses for our delay, and it was because we had breakfast at home before we left. and guess what for the breakfast? of course the yummy instant noodle i bought yesterday! i bought 1 box (30 pieces)! lol. so off we go at 10AM! <(￣︶￣)>

it took about 2 hours for us finally reached The Củ Chi Tunnels. there’s a tour guide waiting for us at the entrance, so we don’t have to worry about getting lost or worse–step on a landmine. a little bit history taken from wiki; The tunnels are an immense network of connecting underground tunnels located in the Củ Chi district of and are part of a much larger network of tunnels that underlie much of the country. The Củ Chi tunnels were the location of several military campaigns during the Vietnam War, and were the Viet Cong’s base of operations for the Tết Offensive in 1968.

The tunnels were used by Viet Cong soldiers as hiding spots during combat, as well as serving as communication and supply routes, hospitals, food and weapon caches and living quarters for numerous North Vietnamese fighters. The tunnel systems were of great importance to the Viet Cong in their resistance to American forces, and helped to counter the growing American military effort.

it was quite interesting to see all the hiding spots underground as well as the traps during the war. i don’t like history lessons, but this tourist attraction was really interactive so it was easy for us to imagine the situation back then and follow the story. while i was there, i think it won’t be wise if i didn’t go inside the tunnels itself. even though it was a bit scary to start crawling inside the tunnels, but lucky i don’t have claustrophobia. i decided to go on. it was dark, small and creepy. but me and my friend managed to finish the 20 meters. and obviously that was the first and the last experience for me. (⌒_⌒;)

at the end of the tour, they served us with a warm yummy tapioca with mashed peanuts seasonings and hot black tea. there was flash rain, so it’s the perfect timing to have warm food and hot tea. many of the tourist didn’t have the delish tapioca, but me and my friend are familiar with this food and ate almost one bowl just for both of us. i wish i carried a plastic bag so i can bring it home (tapao)! lol. (*/▽＼*)

END_OF_DOCUMENT_TOKEN_TO_BE_REPLACED

since singapore will be on holiday for a 50 years national day, it will be very crowded to stay in this small country. so i decided to flee and have a short holiday to Hồ Chí Minh City, Vietnam, on 8 – 11 August 2015. ヽ(>∀<☆)ノ

i arrived night time at Hồ Chí Minh on saturday, 8 Aug, and decided not to go too far from my friend’s apartment, because i need to save my energy for the next 3 days. <(￣︶￣)> 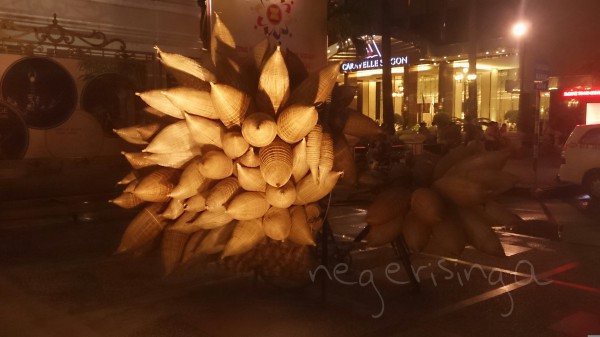